While it’s difficult, it’s not impossible to find new homes costing less than $100,000, mainly in smaller towns. But for a wider choice in retirement locales, consider manufactured-home communities, resales of existing homes and possibly foreclosures or short sales.

Though housing prices are on the rise again, today’s market still offers unique money-saving opportunities. In some popular retirement areas of Florida, older condos have been selling for quite a bit less than $100,000, even lower than $50,000 in some places, and they’re in the midst of shopping and other amenities.

As an example of possibilities, we checked on the scene in Fort Myers, on Florida’s Gulf coast, which at this writing had 3,479 new and resale homes 24 Where to Retire available and 3,444 homes in some stage of foreclosure, according to Trulia, an online data source and marketplace for real estate across the country. We randomly plugged in $50,000 as a maximum price search and turned up page after page of listings in that range alone, offering condos, townhomes and single-family homes, including many foreclosures. We did another search for places between $80,000 and $100,000 and found lO-plus pages of listings, even condos in golf communities. Fewer in this price range were foreclosures.

You could choose several cities of interest in Florida and likely see a large selection of housing for less than $90,000 today.

In manufactured-home communities, you may find new models as well as resale’s in your price range. We checked on the possibilities in several such places. Florida Communities is a family-owned group of manufactured home neighborhoods for 55-plus buyers in central Florida and the Alabama coastal area. Three of its seven communities are sold out, offering resale’s only, while the others have both new and pre-owned homes. In these neighborhoods, residents own the house and lease the land. Private access to a 200-acre lake is one attraction for residents of Lake Hammock Village, a manufactured-home community in Haines City, FL. Prices typically are less than $100,000

All its developments have a clubhouse, pool, activities and varying other amenities such as walking trails and fishing lakes. They’re located in towns with shopping, dining and other perks. Some are less than 10 minutes from grocery stores and malls. For instance, its Alabama community, The Grove, (877) 971-1033, in Foley, close to Mobile Bay and the Gulf, is near a Tanger Outlets Center. In a recent check, The Grove had about 150 homes, with several vacant lots and plans to expand. New two- and three-bedroom models start around $85,000 to $100,000-plus, and resale’s start at about $70,000.

Jensen Communities has manufactured- home neighborhoods in eight states stretching from New Hampshire to Georgia. Most are designated for active adults, including one along the North Carolina coast and, in South Carolina, two in the Myrtle Beach area and one outside Charleston. As an example 26 Where to Retire of possibilities, Southern Palms, (877) 854-6532, in Ladson, northwest of Charleston, has 139 homes of 204 planned, with new models starting in the $90,OOOs and resales from the $60,OOOs. For information on all its neighborhoods, visit JensenCommunities.com.

If Arizona is of interest, the original Sun City development, (800) 437-8146, which opened in 1960, and neighboring Sun City West, (800) 482 3798, are large communities with multiple amenities. They have resale garden apartments, duplexes and single-family homes. The smallest ones may be less than 900 square feet, but many of the older ones have been remodeled and enlarged. Listings are from the $30,OOOs in Sun City and from about $80,000 in Sun City West, where square footage generally is larger. For more information: SunCityAZ.org and SunCityWest.org. A major reason boomers and retirees buy into planned communities is the lifestyle, the opportunity to join other residents in enrichment classes, fun get-togethers and activities of common interest, from golf to tennis to hiking. The 55-plus neighborhoods in particular provide a built-in way to socialize and meet people. Residents commonly come from different parts of the country and often do not know anyone, so the majority reach out to establish new relationships

Over the years, we’ve visited neighborhoods from California to Florida and found that singles feel at home and welcome in the communities. In active-adult developments, we noticed that singles mix easily with couples at the clubhouse/activity centers and restaurants. Many communities have clubs, special events and outings ~ specifically for singles.

With more than 50 communities across the country, Del Webb is the largest builder of active-adult neighborhoods. Nationally, 30 percent of its buyers today are single, reports Valerie Dolenga, a corporate spokeswoman. Company research shows that singles seek opportunities to meet people with common interests and want a variety of social interaction within the community, according to a recent release about the latest Del Webb Baby Boomer Survey. The developer reported that singles clubs have become quite popular in the past five years.

The percentage of singles within a given neighborhood will vary. We advise singles to focus on geographic areas they like and then search for a town and a community where they find activities that suit their interests. When you visit neighborhoods, ask about the number of singles who live there and if any events or programs are specifically geared to them. Many communities allow you to stay overnight and “test -drive” the development, joining in activities at the clubhouse and meeting residents to talk candidly about the place. Ask to be introduced to some singles and see what they say about the lifestyle.

Given that a “warm location” can take in a wide swath of the country, we suggest you start a search among our top 50 communities in states that most interest you. See “The Short List: 50 Best Master Planned Communities in the U.S” in our July-August 2013 issue.

All across the country, numerous planned communities have controlled access and homes that cater to families of all ages. These range from intimate neighborhoods, which you may not learn about until you visit an area, to large, nationally promoted developments with golf courses and abundant other amenities. A real estate agent can help you locate ones in a particular city. Here’s a sampling.

Since you mention Hot Springs, another option there is Red Oak Ridge, a gated community on approximately 800 acres. It’s nature-oriented, with walking-biking trails, a pool complex and two fishing lakes stocked with bass. Currently three neighborhoods are under development with around 80 homes built. The resident mix is about 50 percent boomers and retirees and 50 percent younger families, the community reports. Lots start at $37,900 for garden homes, which are a minimum of 1,800 square feet and are priced from the mid-$200,OOOs. Estate home lots begin in the $40,OOOs, and homes with 3,000 or more square feet go from the $300,OOOs up. For more information: Red Oak Ridge, (866) 768- 3646 or RedOakRidge.com.

Random examples elsewhere include these two large developments in popular areas. St. James Plantation in Southport, on the North Carolina coast, boasts plenty of amenities, among them several golf courses, a beach club, pools and a marina. Its varied home options start in the mid-$200,OOOs. Information: (800) 245- 3871 or StJamesPlantation.com. In Georgia, Riverwood Plantation is in Evans, on the outskirts of Augusta close to the South Carolina border, about two hours east of Atlanta. It has 27 holes of golf, a fishing pond and nature trails among amenities on its 3,000 acres with pine trees. A number of neighborhoods offer varying styles of homes starting at $189,900. Information: (706) 210-3313 or RiverwoodPlantation.com.

We refer you as well to our July-August 2013 issue and the “Short List” feature. A handy chart notes amenities for each of the 50, including whether it is age restricted and has controlled access.

Mary Lu Abbott is editor emeritus of Where
to Retire. 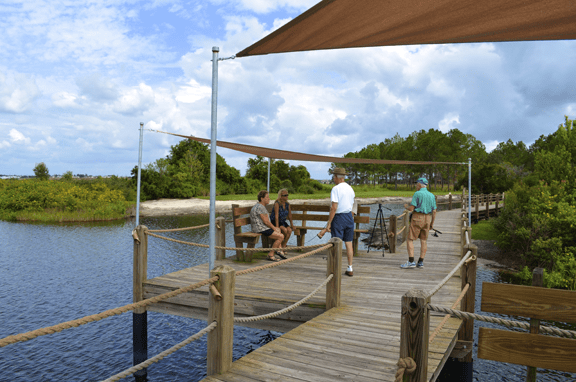 Private access to a 200-acre lake is one attraction for residents of Lake Hammock Village
a manufactured-home community in Haines City, FL. Prices typically are less than $100,000